by Grant Phabao & The Silvertones 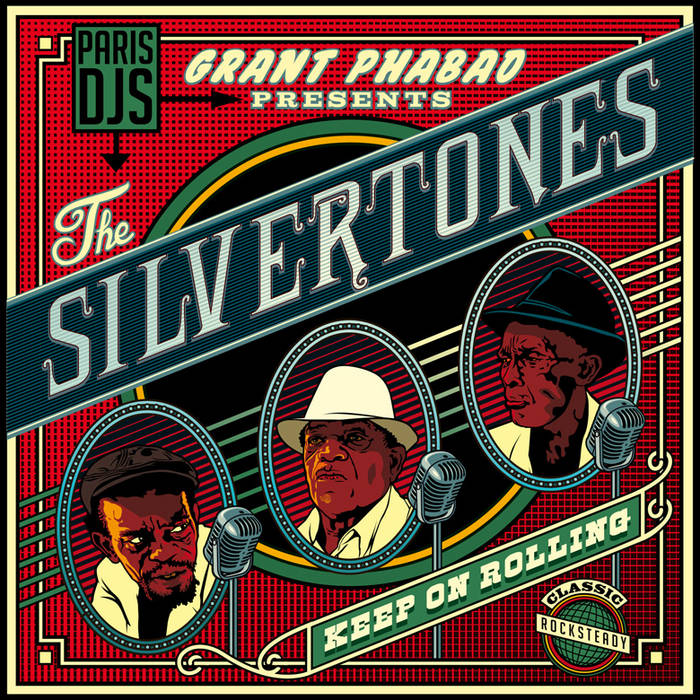 The Silvertones (who also recorded as The Musketeers and The Muskyteers) are a Jamaican reggae harmony group formed in 1964, now comprised of Carl "Smoker" Grant, Keith "Sleepy" Coley, Joel Brown (from early 80s harmonizing trio Kush).

They're best known for their recordings for Duke Reid's Treasure Isle label in the 60s, and with Lee "Scratch" Perry in the early 1970s, who produced their first album 'Silver Bullets', released on the Black Art label in Jamaica and on Trojan in the UK in 1974, in two different mixes.

In the late 1970s The Silvertones had successful singles with Clement "Coxsone" Dodd's Studio One. Their Studio One recordings were collected together along with some of the Duke Reid-produced sides on the 'Young at Heart' album in 1999.

'Keep On Rolling', released early 2013 on the Paris DJs label, is only The Silvertones' third album, and a celebration of a nearly 50 years-long career, with re-recordings of classic Silvertones hits such as 'Smile', 'Old Man River', or Sufferer's Child. There's also a Delroy Wilson cover, 'Better Must Come', a few new songs including 'Only Me' recorded on the 'Message To You Rudie' riddim… and some long-awaited Grant Phabao dub versions, finally!

After albums for rubadub deejay The Lone Ranger, or sweet & soulful reggae singer Carlton Livingston, French multi-instrumentalist/sound engineer Grant Phabao keeps on bringing back legends of Jamaican music into the spotlight, and this 15th release on the Paris DJs label is one not to be missed!

Note that Paris DJs is also celebrating the release of this new Silvertones album with a 27mn mix of their hits and past recordings, from the Ska years in the 60s (with Duke Reid at Treasure Isle), to the Roots Reggae tunes from the 70s (with Lee Perry at Black Art, or Coxsone Dodd at Studio One). Enjoy this half hour history class of classic Jamaican vibes, extracted from old vinyl 45s, mixed and mastered for your optimized audio pleasure download at bit.ly/14dEo4i.