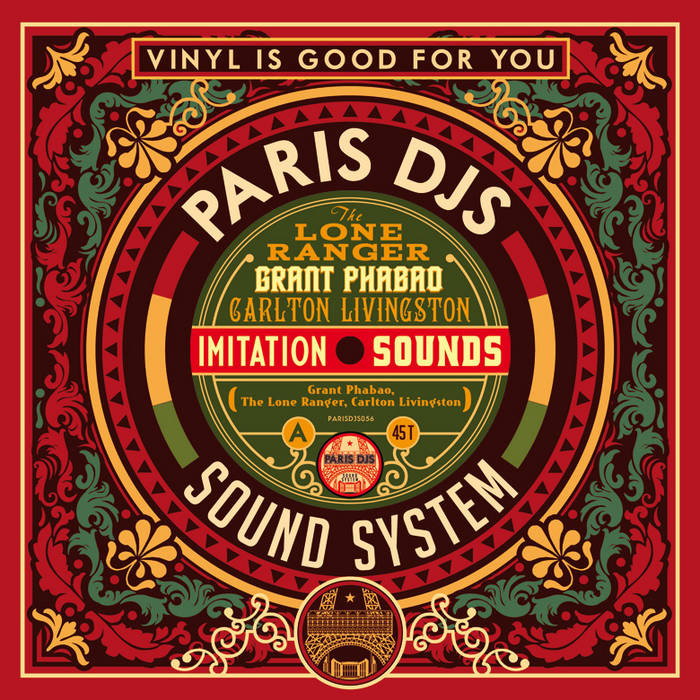 Featured early 2012 in Grant Phabao Live Soul System's 'Dubtape #2', the smashing combination of Jamaican legends The Lone Ranger and Carlon Livingston, after a digital single version in september 2013, finally gets a proper vinyl release!! Recorded a few years ago at Paris DJs' studios, 'Imitation Sounds' has been one of the label's Boom Bam secret weapons. Dissing all the imitators they've crossed in their 30-years long career of doing sound system clashes, all the sounds playing the same ganja, foundation, gangsta, juggling sets without any kind of innovation or creative spirit, the two rhymesters kill it with style and fashion, over a thick and layered reggae riddim from multi-intrumentalist Grant Phabao.
KA-BOOM! You're gonna play this one over and over.

On the B-side, Jamaican rub-a-dub deejay The Lone Ranger and singer Carlton Livingston are reinventing themselves with an eye toward the past on this brand new Grant Phabao roots reggae riddim, bringing back memories of breezy, sun-filled days on the island. The two Carribean rhymesters are bright, talented, and funny people who love being Jamaican. In this new single recorded at Paris DJs' studios in the French capital at the beginning of 2013, they express their love of reggae, Jamaican reggae - this spiritual, fun, unifying music, one of the greatest assets of the country (with the beaches and the jerk chicken of course).

'Take Her To Jamaica Weh Reggae Come From' is a new instant classic, a combination of The Lone Ranger deep and growling rub-a-dub verses, filled to the cup with the 'yeah', 'tell about it', 'boom', 'slang dang dang', 'how you mean' and other 'boom shack' slurs, with the sweet and soulful chorus from Carlton Livingston, the kind that gets stuck in the head and never leaves, bringing smiles to listeners' faces everytime. French producer Grant Phabao delivers an intense and profound instrumental, a cover of Ken Boothe's 'Artibella' from 1965, pure roots reggae music that could have been recorded decades ago in Jamaica by the greats, Bunny Lee, King Tubby, Lee Perry, etc. Close your eyes and listen carefully, you won't hear a one-man musical army trying desperately to add layers over layers. Instead you'll perceive a full band, all playing together an incredibly catchy melody on a funky one drop rhythm - think The Sound Dimension, The Aggrovators, or the Roots Radics!

A welcome addition to the ever growing catalog of 21st century roots music from the Paris DJs label, with marvelous multicolored visuals for this limited edition 45 vinyl release coming out august 2014.