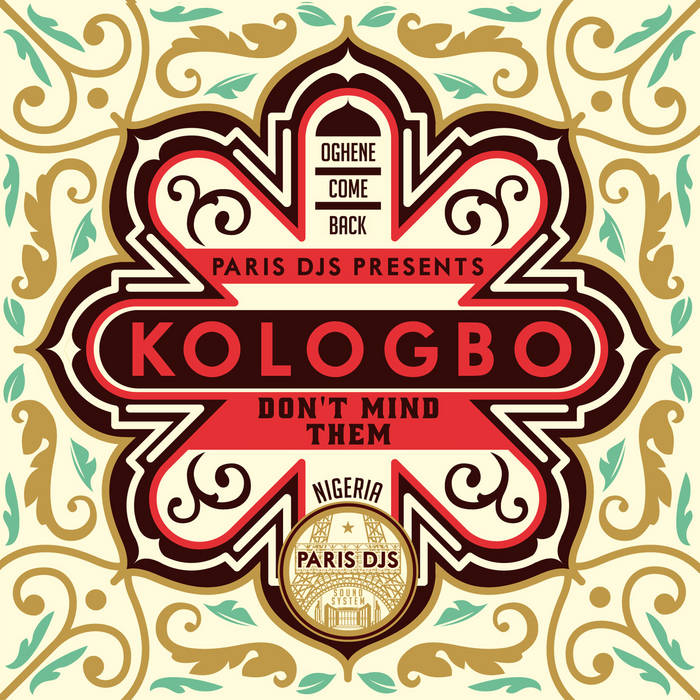 'Don't Mind Them' is the first single extracted from Oghene Kologbo's long-awaited second album 'Africa Is The Future' , to be released in december 2016 on Paris DJs. Kologbo was Fela Kuti's tenor guitar player in Afrika 70. It was only in 2007 that he put out his first solo album, 'Remember Fela' , with the berlin-based Afrobeat Academy (which would later on evolve into Ebo Taylor's band for his 'Love And Death' album). He's been playing with everyone from the afrobeat scene since then, on stage and on record, spreading his knowledge of afrobeat to every musician interested.

In his own words :
"The tune just happened on the spot at Paris DJs, near the end of july 2015. Loik had sent my music to Djouls & Phabao because he was busy. I came to them, we just sat down, and I said "OK, if Loik is delayed, what if we did another song?". They replied "When ?". I said "Now ! Are you ready", and that's how we started. I played the drums first, it was good. Then I played the bass, it was getting better, then the guitar, then the doung, ding, deng deng deng… oof! and it was there.

'Don't Mind Them' is still afrobeat, but the old school taste. And it's the classic, because I play Afrika 70 style. No matter what you hear, this style was kept. Some people like to play Bob Marley style, some people play ska… I love the classic. Tony Allen has a style already, it's the Tony Allen. Femi Kuti has his Positive Force. Seun Kuti keeps the Egypt 80 style. So me I go back to 70. Orlando Julius, Segun Bucknor, Fela, Monomono, Sunny Ade, that's my college of music. And I like the combination of Phabao and Loik, it's one up to my taste, yes. Good things never hide!

I've been doing workshop with Les Frères Smith, playing with them for almost 6 years now, I knew Saké Smith, I knew Fab Smith, instead of bringing some horn players from Berlin or from Bruxelles, I had those ones right in front of me, and we gave it a go ! Daniele from World Squad is on this one too, he played with me many years, so I gave him a chance.

There's also backing singers from South America. Girls from Newen Afrobeat, a band from Chile. This came accidentally, incidentally. I didn't know them. The day we layed down the track, the band was in Paris. They came to see me in the evening at the place I was staying, all of them. We had fun. When I put my new music on, they started singing on the chorus! I said "Would you like to come to the studio tomorrow to record it ?" We practiced, did a workshop together that night. They are good, I was lucky they passed around ! I even played with them and Tony Allen a few days later…

'Don't Mind Them' comes from suffering. That day we were talking, and it just came to my head. I remembered all the stories I was telling, my experience. I see all the problems around me: television, politicians, my so-friends and the people I work with… They promise you that, they promise you this… everytime it's zero. That's how I came to "Don't Mind Them". I want to be myself. No matter what will happen, it'll happen. I'm kickin', movin', I don't mind them." — Oghene Kologbo, september 2016