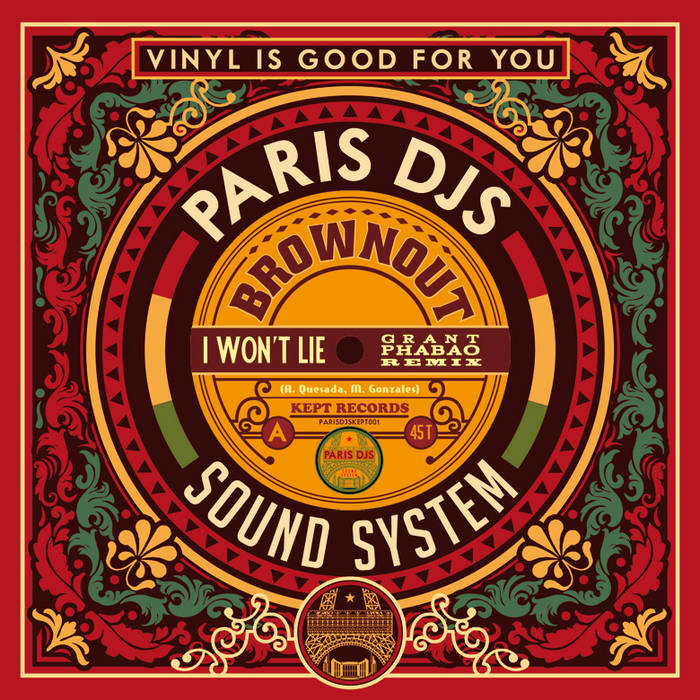 Paris DJs, from Paris, France, have been putting out for seven years hundreds of astonishing thematic mixes, which gathered millions of downloads. They have now morphed into a unique music label. From Reggae to Afrobeat, Jazz to Funk, Ethio-Jazz and Latin Soul… the artistic direction of the label is as eclectic and hard to please as it's been during the previous seven years! Before, they were releasing a new mix every week to the delight of musical connoisseurs from all over the globe. Now, they're releasing a new, original single, or album, every week, with many artists from their ever-expanding network coming into play with tracks and collaboration ideas. As the Craig Charles Funk & Soul Show puts it: 'The Paris DJs label... take a look at their website, the amount of high-quality Afro, Soul, Ska & Reggae that they're throwing out just now is breathtaking. 'Dis Is Good For You', their actual compilation, it's good for ya!'. Nuff' said.
Check them out here www.parisdjs.com

Kept Records, from Calgary, Canada, is a record label of Funk, Grooves, Breaks & Brass engaged at 45 RPM. They've been releasing some very collectable & funky 7 inches these last years, all killer, no filler! Five of them, precisely: some Polyrhythmics afrofunk & heavy funk to begin with, then a killer latin/brass/soul thing from Brownout, spychedelic funk from Alpman, more afrofunk from Polyrhythmics, and afrobeat or funk from Hard Proof. Some very interesting stuff is in preparation, including the label's first full length album…
Check them out here www.kept-records.com

Brownout is a fantastic latin-funk band from Austin, Texas, led by regular Paris DJs collaborator Adrian Quesada, who've been putting out heavily recommended albums and singles of killer Latin-Funk breaks, grooves and soul. Their latest full-length 'Oozy' was one of the best albums of 2012, and their Kept Records 45 'Flaximus/I Won't Lie' was one the best singles of the same year, in Paris DJs's book.
Check them out here www.brownoutmusic.com

Parisian multi-intrumentalist Grant Phabao might be the most essential producer of 21st century roots Jamaican music. His sound and mixing style got him the praise of most veterans from Studio One in Kingston, who never forget to come to Paris DJs studios in the French capital to voice some new riddims with him when in town, saying he's 'bringing back the original King Tubby sound with a modern twist'. Four albums, with respectively The Lone Ranger, Carlton Livingston, The Silvertones, and The Jays, have already been produced by Grant Phabao and released on the Paris DJs label. Many more singles and remixes too, already gathering half a million downloads wihout any kind of promotion. Grant Phabao is now played on many radios all over the world and will be spinning his tunes along with the Paris DJs Soundsystem at the Glastonbury festival in june 2013.
Check him out here www.grantphabao.com

Renegades Of Jazz is raw and heavy produced music, fusing jazz with breakbeat elements, bringing the jazz back to the dancefloor. They've been heavily present on ParisDJs.com with reviews, 2 exclusive mixes and many plays in various Paris DJs mixes along the years. Their full length album 'Hip To The Jive' enlightened the summer of 2011 and beyond. Having them aboard the label adventure (i.e. in one of Paris DJs releases) was just a matter of time!
Renegades Of Jazz have been working like crazy recently, putting out a remixed version of their first album, many singles, an avalanche of very cool dancefloor-jazz-friendly remixes (including Bajka, Bahama Soul Club, Karthala 72, our collegues from Jungle Fire, Hugo Kant, Colman Brothers, Skeewiff, Insight, Mayer Hawthorne, Anthony Joseph and many more).
Check them out here renegadesofjazz.com

Before running the Kept Records label, founder Dale Barrie was putting out some cool mixes of 45s on Paris DJs as Citizen Dale. Now both entities have became music labels, and they're still conspirating together - for official releases this time! After licensing a Polyrhythmics track for the second Paris DJs Soundsystem compilation 'We Are The Fire Inside Your Mind', Paris DJs and Kept Records are proud to gather their mutual friends from Texas, Germany and France in the form of an exclusive joint-release of a two-tracks digital single.

Brownout is the band. Grant Phabao is the reggae/dub remixer. Renegades Of Jazz are the Bboy Editors. Ben Hito is the illustrator. Paris DJs and Kept Records are the label. You're SO gonna love this one.

If you like I Won't Lie (Grant Phabao Remix) / Flaximus (Renegades Of Jazz B-boy Edit), you may also like: